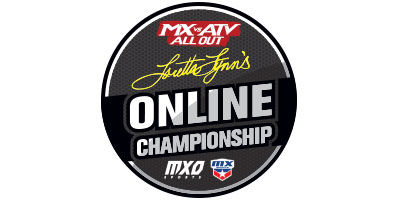 MORGANTOWN, W.Va. (April 14, 2020) – MX Sports, producer of the AMA Amateur National Motocross Championship at Loretta Lynn’s, is excited to announce the 2020 Loretta Lynn’s MX vs. ATV Online Championship. This four-weekend, online tournament is the result of a unique collaboration between MX Sports, THQ Nordic, Rainbow Studios and MXO Sports and is designed to bring all the fun and competition of MX racing to fans at home.

The Online Championship will be played in Rainbow Studio’s MX vs. ATV All Out video game and begin this weekend, April 18 and 19, and run for four consecutive weekends ending on May 9 and 10. Players competing on Xbox® One will compete to qualify each Saturday during the championship, while players competing on PlayStation® 4 computer entertainment system will compete to qualify each Sunday. Saturday’s qualifying races will take place on the RedBud MX track, while Sunday’s races will be held on the Washougal Motocross Park track. The final race for the Championship will take place on the legendary Loretta Lynn’s motocross track.

“During this time of stay-in-place orders and social distancing, nearly all of our riders are unable to ride their real motorcycles,” said MX Sports Event Director, Tim Cotter. “We are extremely happy to have created this fun and exciting platform that will provide a gateway for our athletes, as well as fans of the sport, to race the Loretta Lynn program virtually.”

Tim Cotter continued, “The folks at Rainbow Studios have created a realistic replica of the Pro Motocross National tracks and most importantly, Loretta Lynn’s. Our riders will get the true feeling of racing through the ten commandments, storyland, and the Thor sweeper just as if they are at the ranch during the first week of August.”

"We are excited to be bringing competitive online Motocross racing to this amazing combined community of riders, players and MX enthusiasts," said Lenore Gilbert, CEO, of Rainbow Studios. "It's a challenging time for all of us, but Rainbow is working hard to keep the racing and hot laps coming on these legendary tracks."

Three classes will be offered for each competitor: Beginners, Intermediates and Experts. To sign up for the 2020 Loretta Lynn’s MX vs. ATV Online Championship, go to www.mxosports.com. Prize packages will include a variety of Pro Motocross Gold Passes for the 2020 season, Monster Energy swag, autographed jerseys and gear from Thor and Fox, along with one-of-a-kind Loretta Lynn Motocross memorabilia.

MX vs. ATV All Out is the latest installment in the MX vs. ATV franchise and invites players of all skill levels to go off-road and do it all - explore massive environments, compete in the best series events, ride freestyle and pull off insane stunts! All the bikes, tracks, gear, music, riders, personalities and even ATV’s and UTV’s are packed in! MX vs. ATV All Out and the 2019 AMA Pro Motocross Championship DLC is developed by Rainbow Studios, published by THQ Nordic and available for PlayStation®4 computer entertainment system, the Xbox® One family of devices, including the Xbox One X, and PC.

MXO Sports is made up of a group of motocross enthusiasts that have taken their passion for motocross and adapted it to their love of gaming. They are an online organizer of motocross gaming events, and their ultimate goal is to bring together the fastest players to compete in premier tournaments online. Their focus remains on the MX vs. ATV All Out game, and creating a community for all things motocross in the gaming world. MXO Sports will handle the staging process of the Championship, and will also run the qualifiers and championship race.

MX Sports, Inc., owns, manages and produces the most prestigious and world's leading amateur motocross championship: the AMA Amateur National Motocross Championship. Through its various racing affiliates, MX Sports fields more than 60,000 action sports athletes each year and attracts millions of active fans, spectators and enthusiasts. MX Sports is a second-generation, family-owned business in operation for well over 38 years and is an industry leader in the segment of off road/action sports race promotion in the United States.

For more information on the AMA Amateur National, visit the series official website at www.mxsports.com or call (304) 284-0101. Join the conversation on the event’s social media channels, along with receiving the most up-to-date news and exclusive content.

The official THQ Nordic boilerplate can be found at: https://thqnordic.com/company/about

The AMA Amateur National Motocross Championship is the world's largest and most prestigious amateur motocross racing program. The national qualifying program consists of 54 Area Qualifiers (February through May) and 13 Regional Championships (May through June), hosted at select motocross facilities across the country. The qualifying system culminates in the National Final (first week in August) hosted annually since 1982 at the home of country music star Loretta Lynn in Hurricane Mills, Tenn. Nearly 22,000 racers attempt to qualify in 35 classes for the 1,446 available positions at the National. Christened "The World's Greatest Motocross Vacation", the National event serves as a launch pad for some of the biggest names in professional motocross and supercross, including Ricky Carmichael, James Stewart, Ryan Villopoto, and Ryan Dungey. The national program is produced by MX Sports, Inc., a West Virginia-based race production company and sanctioned by AMA. For more information, please visit www.mxsports.com.

About the American Motorcyclist Association