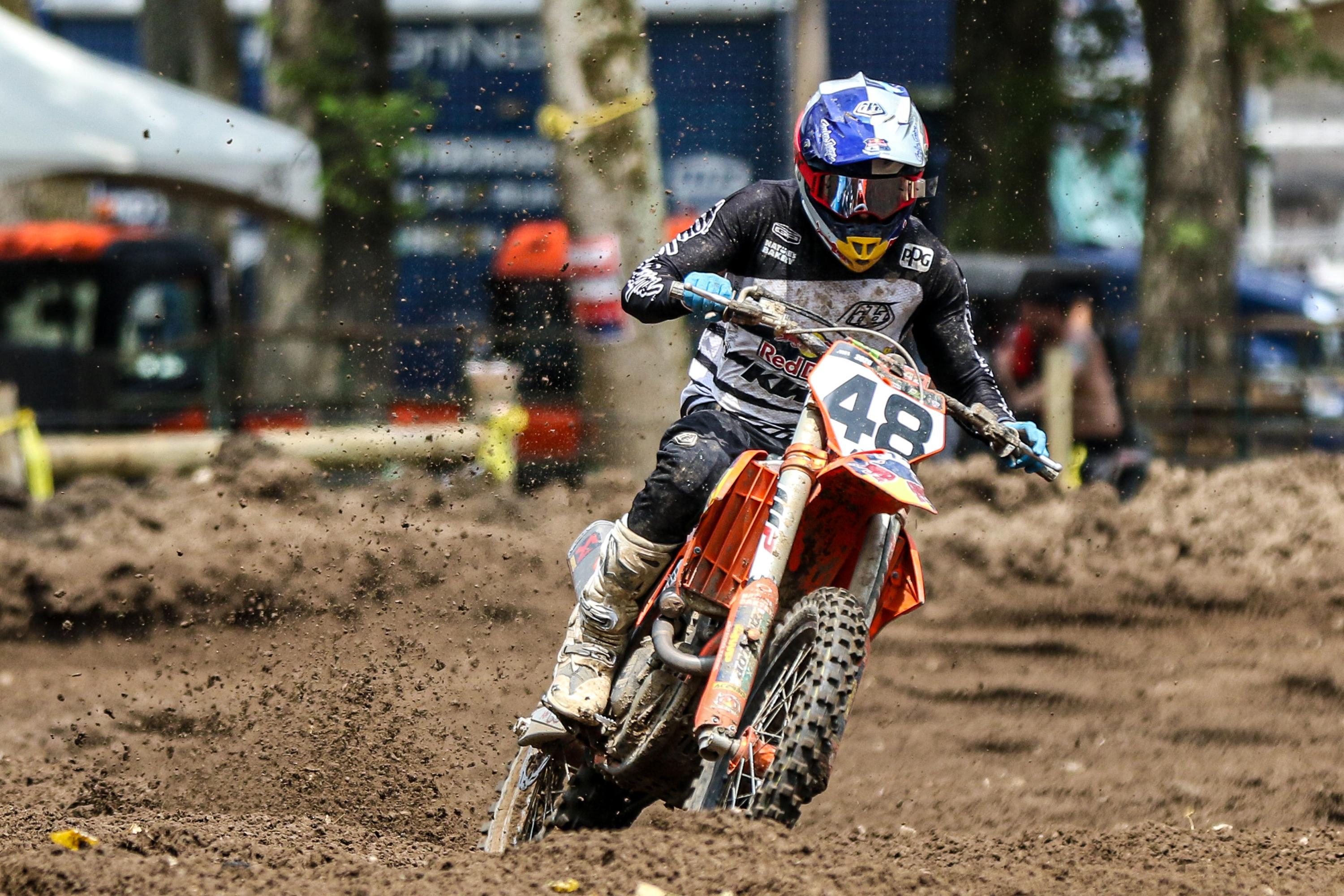 HURRICANE MILLS, Tenn. (August 20, 2020) – The 2020 Loretta Lynn’s Amateur Day Motocross, held in conjunction with the Loretta Lynn Pro Motocross, round 1 of the Lucas Oil Pro Motocross Championship, took place on August 16 at Loretta Lynn’s Ranch in Hurricane Mills, Tennessee, with awards given in 27 classes. The race provided some of the fastest amateurs in the country an opportunity to compete on the same course as the top professionals in the world, and the Loretta Lynn course featured some amazing racing.

Thanks to MX Sports’ 2020 COVID Mitigation Health Plan, the event was a huge success, with racers and teams taking appropriate actions to guard against the threat of COVID-19, while offering up some of the best racing of the year.

After some impressive finishes in the 250 B and Schoolboy 2 (12-17) B/C classes at the 2020 AMA Amateur National Motocross Championship just two weeks prior, TLD/KTM’s Nate Thrasher dominated the A classes on Loretta Lynn’s Amateur Day, sweeping the 250 A and Open A classes.

In the 250 A class, Thrasher’s 1-1 performance topped the 2-3 moto tally of runner-up finisher Daniel Netti (YAM), and the 4-3 of third-place finisher Justin Sipes (KTM).

In the Open A division, Thrasher swept both motos ahead of the 2-2 finish of Adam Cranford (KAW) and the 4-3 of Logan Parks (HON).

“It feels good to move up into the A classes and win right away,” said Thrasher. “I got good starts in the 250 class, but I was riding my 250 in the Open class, so I had to work my way up in the two Open motos, but I was able to get it done. This is a confidence booster, for sure, moving forward.”

Mirroring Thrasher’s success in the A class was Orange Brigade KTM’s Cayden Braswell, who dominated the B classes, going 1-1 to win the Open B class and 1-1 to win the 250 B division.

KTM’s Jesse Burkeen went 3-2 to finish second in the Open B class, while Yamaha’s Collin Gosnell turned in a 4-3 moto tally to finish third overall.

In the 250 B division, James Runyan went 2-2 to claim the runner-up spot behind Brasnell, with Jesse Burkeen going 5-3 for third.

One of the most competitive classes of the day was the Supermini class, which was won by Mississippi’s Landon Powers, who went 1-2 in the two motos to claim the overall win on a Husqvarna. KTM’s Landon Gibson won the second moto from Powers, but a third in moto one dropped the Georgian to second overall.

Third overall in the Supermini division went to Clayton Stockstill, who turned in a 2-3 moto finish on a KTM.

One of the biggest and most competitive classes was the 125cc B/C class, where local boy James Runyan won his heat race and won the final moto to take the overall win. Mason Naecher was second on a KTM, while Case Burton brought his Husqvarna home in third.

KTM-mounted Shelby Rolen took the overall win in the 30+ class with a third and a second, while Honda-mounted Jon Cone used a first and a sixth for the runner-up finish. Jesse Cabello (Hsq) went 4-4 for third overall.

For information about the Lucas Oil Pro Motocross Championship, please visit ProMotocross.com and be sure to follow all of the Pro Motocross social media channels for exclusive content and additional information on the latest news:

The Lucas Oil Pro Motocross Championship, sanctioned by AMA Pro Racing, features the world's fastest outdoor motocross racers, competing aboard homologated bikes from one of six competing manufacturers on a collection of the roughest, toughest tracks on the planet. Racing takes place each Saturday afternoon, with competition divided into two classes: one for 250cc machines, and one for 450cc machines. MX Sports Pro Racing, the industry leader in off-road powersports event production, manages the Lucas Oil Pro Motocross Championship. The title sponsor is Lucas Oil, a leading producer of premium oils, greases, and problem-solving additives, all made in America. More information can be found at www.ProMotocross.com.

About the American Motorcyclist Association: