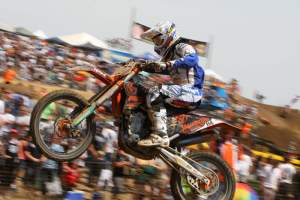 Rancho Cordova, CA - The second round of the Lucas Oil Motocross Championship was held at the Hangtown Motocross track where Jagermeister/MDK/KTM 450 rider Justin Brayton earned a top then finish in both of his motos taking 8th overall for the day.

The first moto started well for Brayton when he came around the first turn in 4th position. Factory KTM Canada rider Jeff Northrop pulled an impressive start when he rounded the first turn in 2nd place only to take the lead a moment later after the current leader, Mike Alessi, crashed. Northrop held the lead for about half of a lap before Ivan Tedesco took over. "It was a little nerve-racking being out front, but man did it feel good," commented Northrop on his temporary lead.

As the moto continued Northrop remained in the top five until the fifth lap when Brayton passed him to take over 6th position. Brayton showed great speed during the first moto challenging both Josh Grant and Chad Reed. Brayton eventually lost a position to Chad Reed and Matt Goerke but secured his spot inside the top ten with an 8th place finish in moto one. Northrop finished 16th while Jagermeister/MDK/KTM rider Josh Summey had a bad start and three crashes which put him in 36th position when the checkers flew.

Brayton earned a 12th place start in moto number two while Summey was a few positions back in 18th. Northrop crashed on the first lap and started from dead last. Brayton moved into 11th on lap two once David Millsaps pulled off and then moved into 10th on lap five when he passed Jeff Alessi. Brayton finished the moto in 10th position after battling with Thomas Hahn, Matt Goerke, Troy Adams and Chris Blose. Summey who had fallen as far back as 28th after a rider pushed him off the track moved up to 21st. Northrop came from dead last to finish 26th. "I was happier with my ride this week," commented Brayton. "I am still shooting for a top five finish and am working my way closer each race." 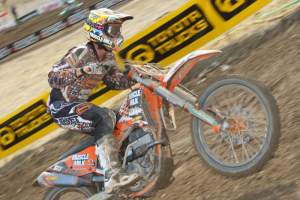 In the 250 class, the British Motocross Vice-World Champion Tommy Searle, had a decent 5th place start as the riders began up the hill. The rest of his fellow KTM riders were in the middle of the pack and had to work their way up. Searle remained in 5th position until he began to close in on Brett Metcalfe on lap five. Unfortunately, Searle made a mistake while trying to make a pass and he crashed allowing Brock Tickle and Tyla Rattray to pass. Searle recovered in 7th and quickly began to charge toward the front riders. Searle battled with Jake Weimer on lap ten and then made a mistake on lap eleven which allowed Weimer to pull away while he also got passed by three other riders. With two laps to go Searle was charging back toward the top ten when he encountered a mechanical problem and had to pull off the track. His teammate Wil Hahn had equal bad luck when he came together with J-Law/KTM rider Max Anstie on the fifth lap causing both riders to crash and not finish the race. KTM Canada's Eric Nye finished the moto in 16th.

The second moto was better for all KTM riders. Anstie started 8th with Searle close behind in 10th. Nye and Hahn were mid-pack. Anstie and Searle battled back and forth for the first five laps swapping 8th position. Searle continued to hold his pace and battled with PJ Larson and Rattray throughout the moto. He held on for 9th overall while Anstie finished 12th - his career best. Hahn was one spot back from Anstie in 13th and Nye finished 16th.  